It may not look like much at first glance, but we assure you – the Asus ZenBook UX310UA is one of the best Ultrabooks around right now, and it deserves your attention. Not only does this affordable Ultrabook have smooth style and respectable performance, but the Asus ZenBook UX310UA is so finely tuned in every way that it may just be the best laptop for anyone looking for a jack-of-all-trades device.

The Asus ZenBook UX310UA is so great precisely because of how it follows in the MacBook Air’s legacy without fail – a laptop once considered to be the ideal of svelte design housing powerful components. This alone is enough to make the ZenBook UX310UA noteworthy – even in 2018.

The Asus ZenBook UX310UA is evidence that Asus keeps improving its notebooks – so much so that we refer to this laptop as the de facto heir to the Macbook Air’s throne.

It’s almost like Asus stepped up and said “Well, if Apple won’t do it, we will”. Talk about courage…

First up, the Asus Zenbook UX310UA is incredibly pretty, arguably better looking than Apple’s spurned masterpiece, in case you couldn’t tell from the CD-like glare on its all-metal finish.

That’s right, those concentric circles emanating from the Asus logo are as impressive in real life as they are in our photos. Better yet, the smooth lines around the edge are even more apparent. The icing on the cake, however, is that you’re saving money by going the ZenBook route. The MacBook Air is more costly and leverages antiquated tech. So far so good.

Sizing it up to the competition, the Asus ZenBook UX310UA is mostly on par. It’s a little thicker than the Macbook Air which is 1.7cm, while the laptop we reviewed here is 1.84cm and admittedly doesn’t have the tapered end.

In order to keep the price low, Asus has increased the thickness, but kept the build quality high. A fair compromise in our eyes.

Before you’ve even turned it on, the packaging is elegant. Unlike a lot of laptops, this one is worthy of an unboxing video.

Upon opening the lid, the simple message “In Search of Incredible” is engraved on the inner lid, which is a nice touch. There’s a distinct lack of plastic and cable ties, too. Of course, the MacBook Air wins out power-wise, as it’s one of the few devices that still uses the awesome MagSafe charger, the Asus ZenBook UX310UA uses a perfectly serviceable L-shaped plug, though.

Speaking of ports, the Asus ZenBook UX310UA has them in spades. Along the left side you’ll find the aforementioned round charging socket, a USB 3.0, HDMI, USB-C and a headphone jack with an integrated microphone socket.

On the right there are two USB 2.0 ports, an SD card reader and a couple of lights, one for the hard drive and the other that let you know that it’s actually on, or if the battery is charging.

It’s a pity that the two USB inputs on the right aren’t 3.0 like the one on the left, but it’s handy that there’s a USB-C port included.

Coincidentally, the USB 3.0 port on the left of the device supports USB Charger +, an Asus technology that allows you to quick charge external devices even while it’s off or hibernating. There’s bundled software included that’ll help manage the laptop’s battery when using the ZenBook UX310UA to charge other devices. 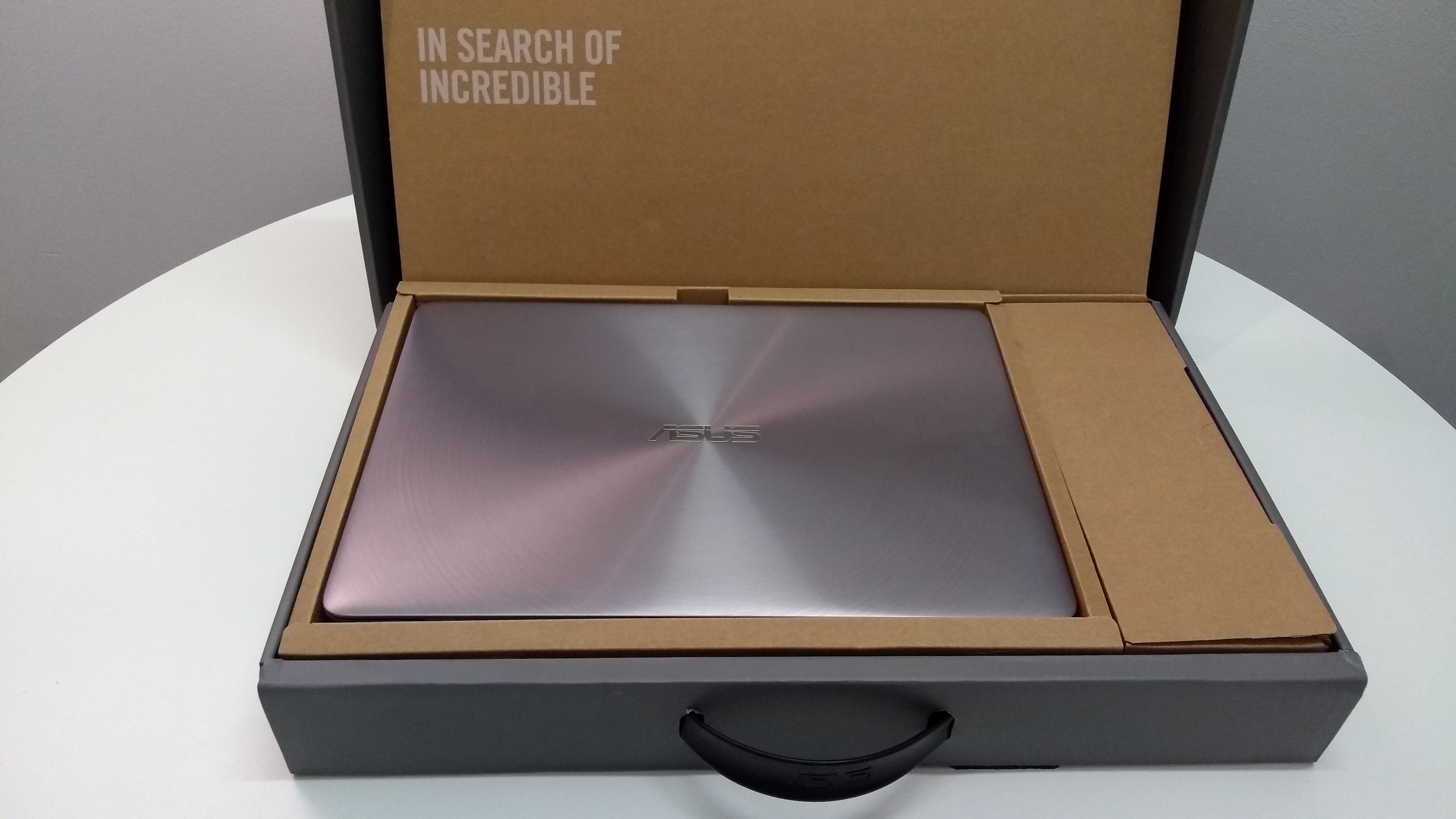 Before you’ve even turned it on, the packaging is elegant. Unlike a lot of laptops, this one is worthy of an unboxing video.

Upon opening the lid, the simple message “In Search Of Incredible” is emblazoned on the inner lid, which is a nice touch. There’s a distinct lack of plastic and cable ties too. Of course the Macbook Air wins out power wise as it’s one of the few machines that still use the brilliant MagSafe charger, here though it’s a perfectly serviceable L-shaped plug. 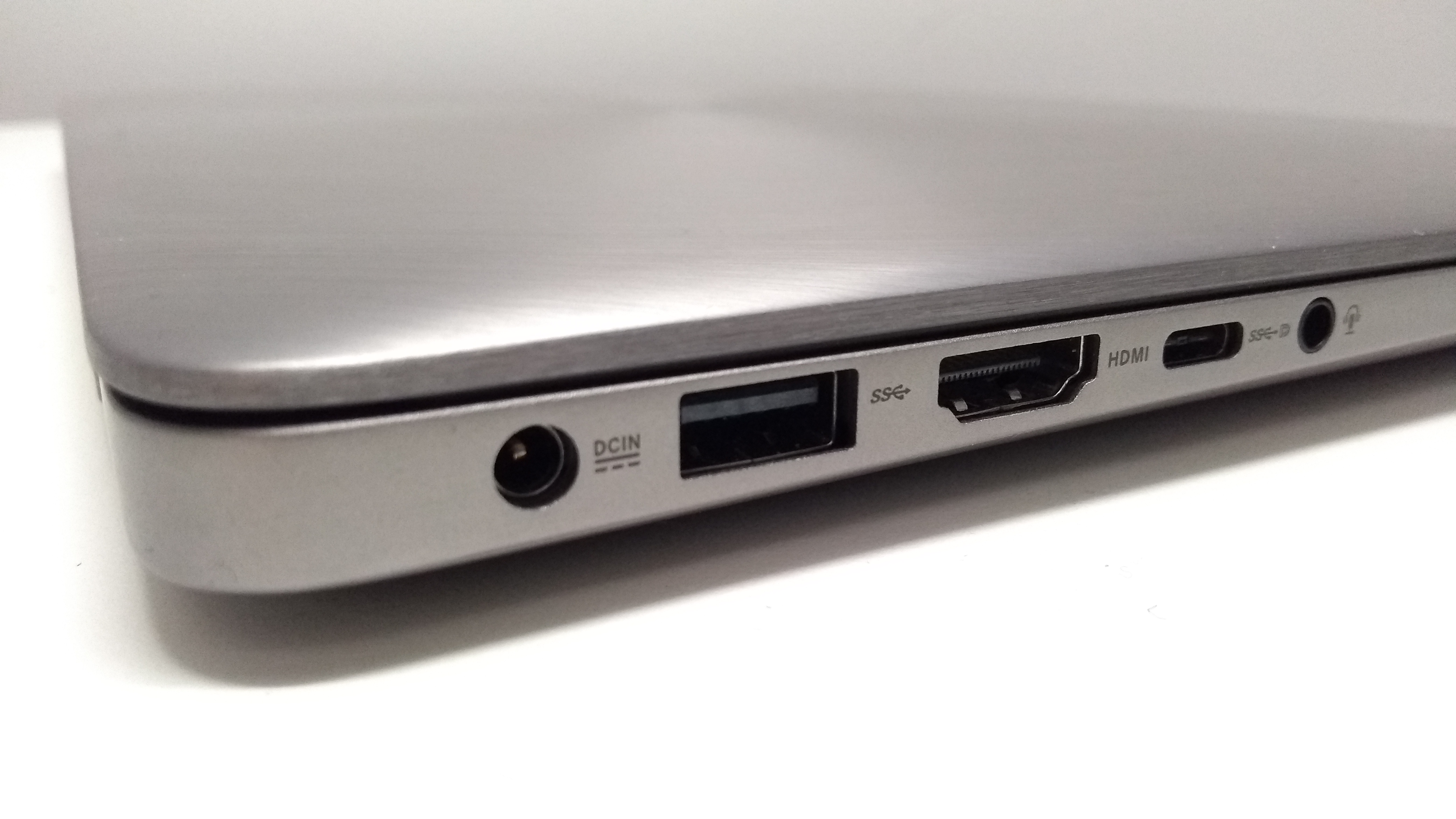 Speaking of plugs, the Zenbook isn’t short of sockets. Along the left side you’ll find the aforementioned round charging socket, a USB 3.0, HDMI, USB C and headphone with integrated microphone socket.

On the right there are two USB 2.0 ports, an SD card reader and a couple of lights, one for the hard drive and the other that let you know that it’s actually on, or if the battery is charging.

It’s a pity that the two USBs on the right aren’t 3.0 like the one on the left, but it’s handy that there’s a USB C port included.

Incidentally the USB 3.0 port on the left supports USB Charger +, an Asus invention that charges external equipment quickly even while it’s off or hibernating. There’s bundled software included that’ll help manage the laptop’s battery when using this facility. 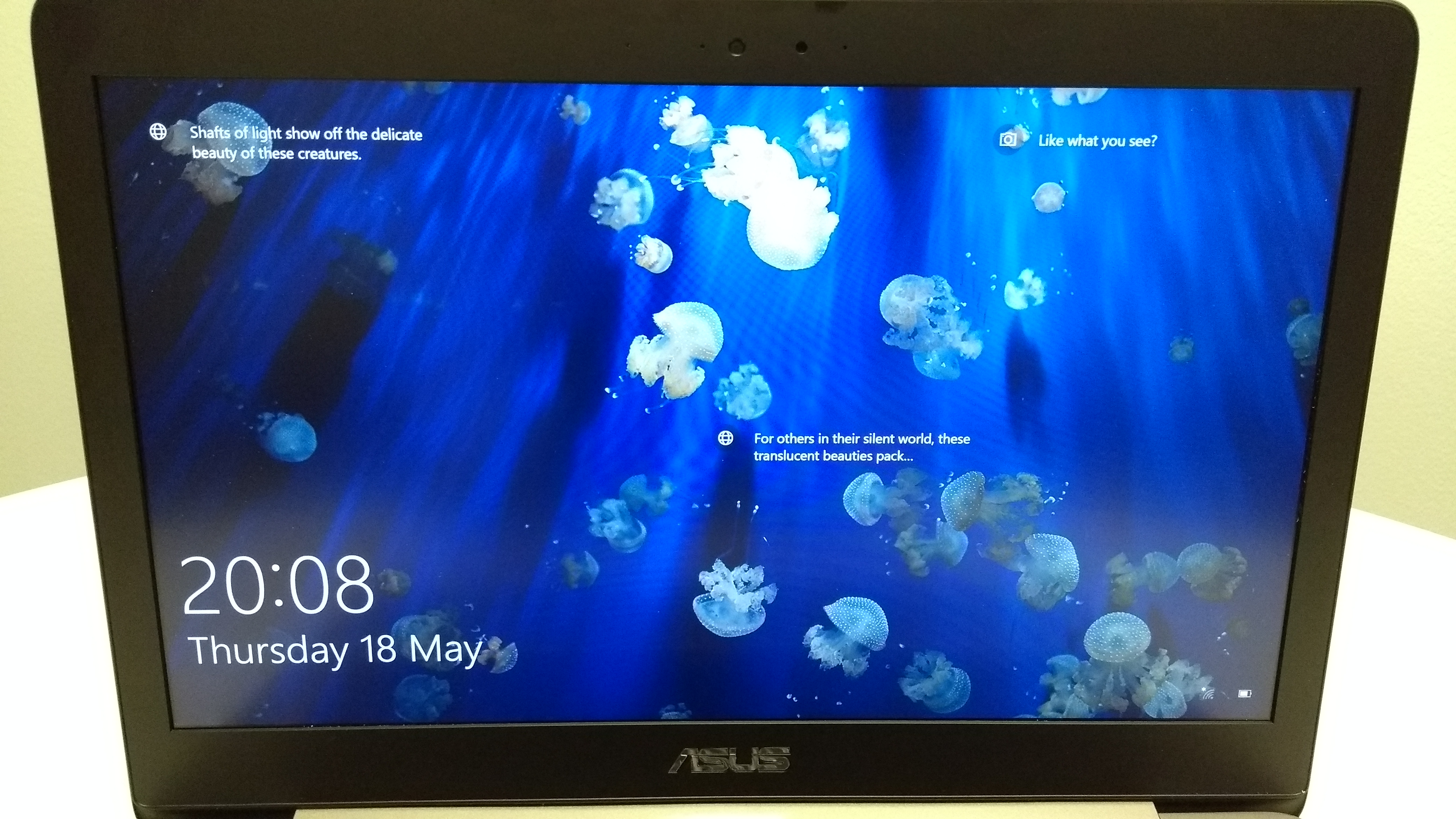 And my word is it a glory to behold. Viewable from a wide range of angles (178 to be precise) and the Anti-Glare actually does what it’s meant to do.

There is very little edge burn when the screen’s entirely black and the colors are well-defined, deep and avoid looking garish. This screen could work for photographers on the move because of its wonderful color definition.

And, if we go back to the Macbook Air comparison, at the same price point you most definitely wouldn't be getting a Retina screen. If we have one criticism, the bezel is a little large, but it’s not too obtrusive.

At first we thought the keyboard wasn’t up to scratch, as typing causes a slightly disorientating bend in the center. However, the bend isn’t a detriment to the usability, as once we got used to it, it’s a perfectly functioning mechanism with low noise and reliable keys. But you may need give it time to adjust if you're used to rock-solid keyboards. 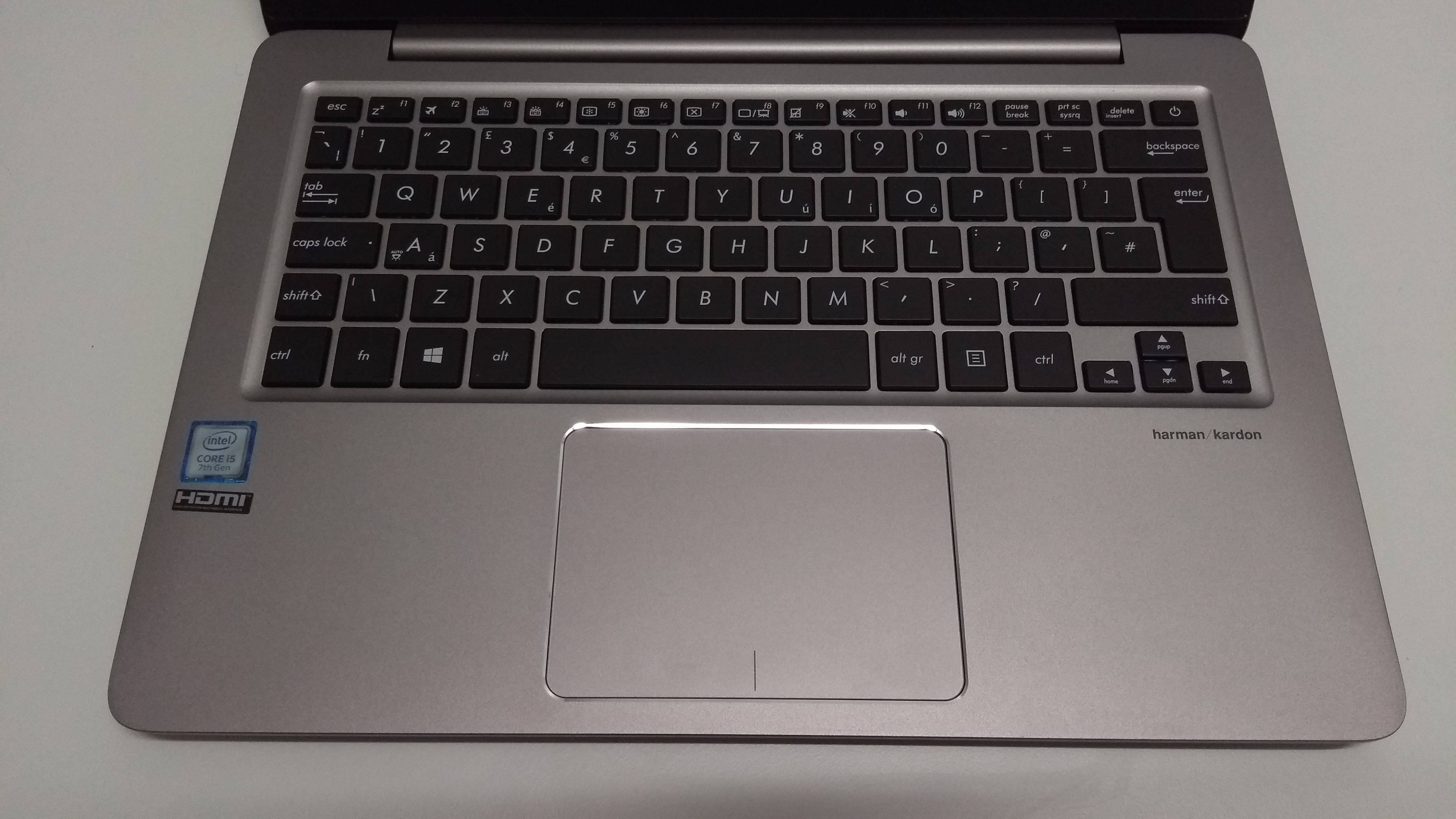 Similarly with the trackpad, it took a bit of setup and getting used to. The pinch zoom doesn’t really work, as it would often get set off while using two finger scrolling.

In the end we had to turn off the zoom and just use keyboard shortcuts. Not an ideal solution, but we prefer to be able to use two finger scroll and can do without pinch zoom. The pad itself feels a little slippery compared with others. But again, this is not a deal breaker and these niggles are fixable.

Unfortunately, when it comes to specs, the Asus ZenBook UX310UA simply isn’t in the same class as the superior Dell XPS 13. At the same time, it’s a lot cheaper than Dell’s flagship, too.

So what to compare it to? As mentioned earlier, Lenovo’s Ideapad 710S is in a similar ball park but it suffers from an odd keyboard layout and is chock-full of bloatware. Asus is charting new waters, as many options at this price point go down the touch screen or all-in-one route. The UX310UA is none of these: it’s a simple laptop done very well. 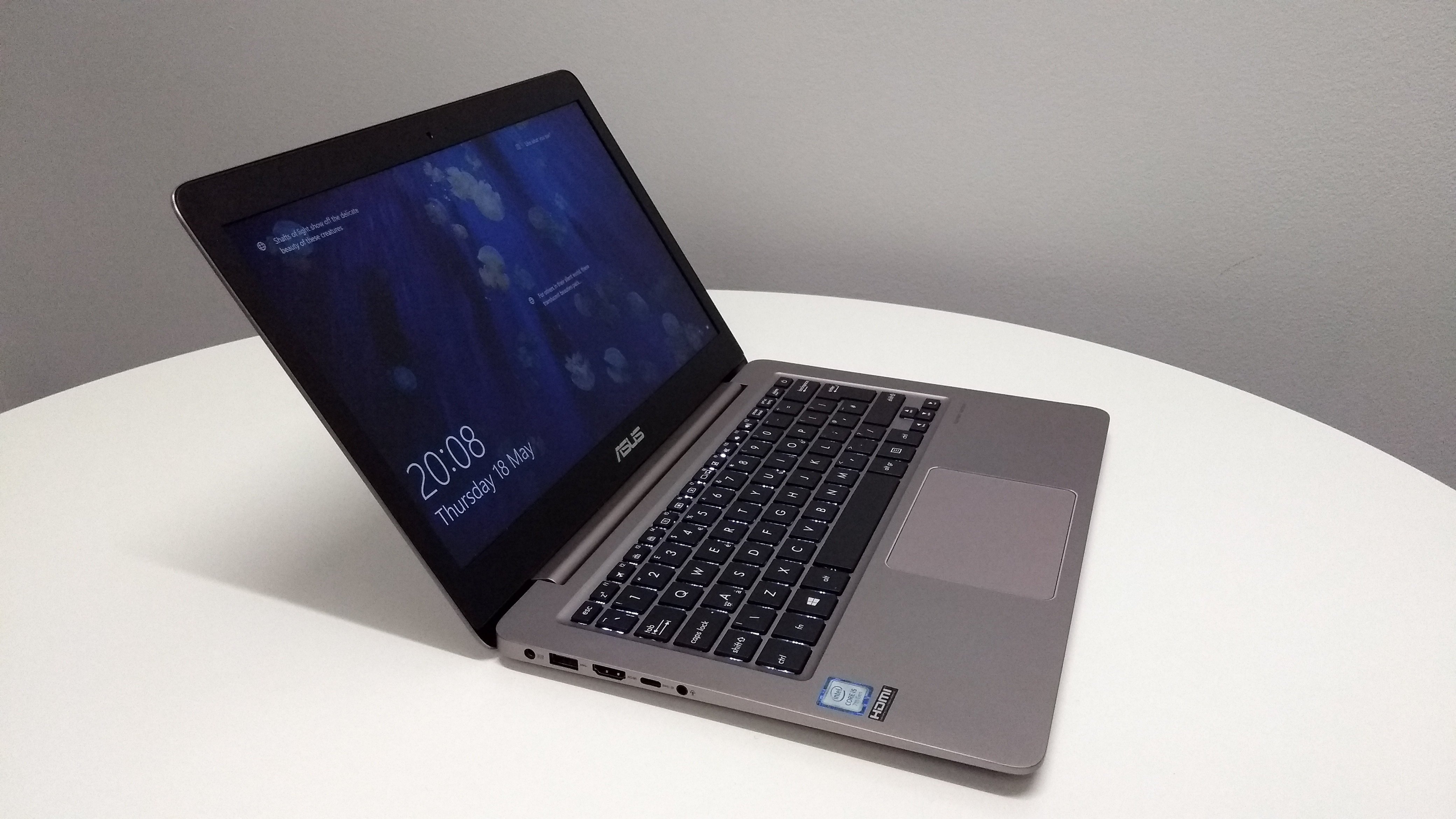 The 3DMark tests are predictably low seeing as there’s no discrete graphics card in there, just an onboard Intel HD Graphics 620. It scraped 4,000 on the Cloud Gate test, meaning it’ll play the odd game from a few years ago. If you’re looking to play games then you should go for the Zenbook UX310UQ as that has an NVIDIA GeForce 940MX tucked inside.

Its battery performed pretty well at 4 hrs 13 mins on PC Mark’s harsh battery test. It fared less well with our film loop test, only reaching 5 hours 24 mins, while the Dell and the HP Spectre 360 claim 7 or 8 hours.

In everyday use we found the battery life fine but not outstanding. It would last a working day at a push, and longer with more casual use.

Still, we did notice a slight issue with fan management. Unlike the MacBook Air, the fan is always on. It’s not loud, but it will be noticeable in a silent room. Mechanical operations are usually the highest drain on battery life (one of the many reasons CD drives are nowhere to be found in modern portable machines) and it’s curious shy Asus has in turn ditched its Fan Xpert software which could have helped in this situation. There is third party fan management software out there, but none that are specifically tailored to this machine at the time of this writing. If you do decide to go down that route, please be careful.

The brains behind this laptop is a Kaby Lake Intel Core i5-7200U, and while not top of the range, it’s incredibly able at word processing and video streaming. Originally a 2.5GHz processor, Asus has it running here at 2.7GHz for an extra boost. It’s coupled with an ample 8 GB of DDR4, 2,133MHz RAM upgraded to a humongous 20GB. Specs wise, you’re getting a pretty good deal.

If speed is what you’re after, we timed it at 4 seconds from opening the lid from sleep to seeing the Windows desktop. A time that means it’s pretty much equal to the MacBook Air’s speedy wake-up time. It packs a somewhat small 256GB SSD with no secondary drive in the sample we reviewed, which was probably to keep the weight down. There are options available on Asus’s site with an extra hard drive if you need one, however. 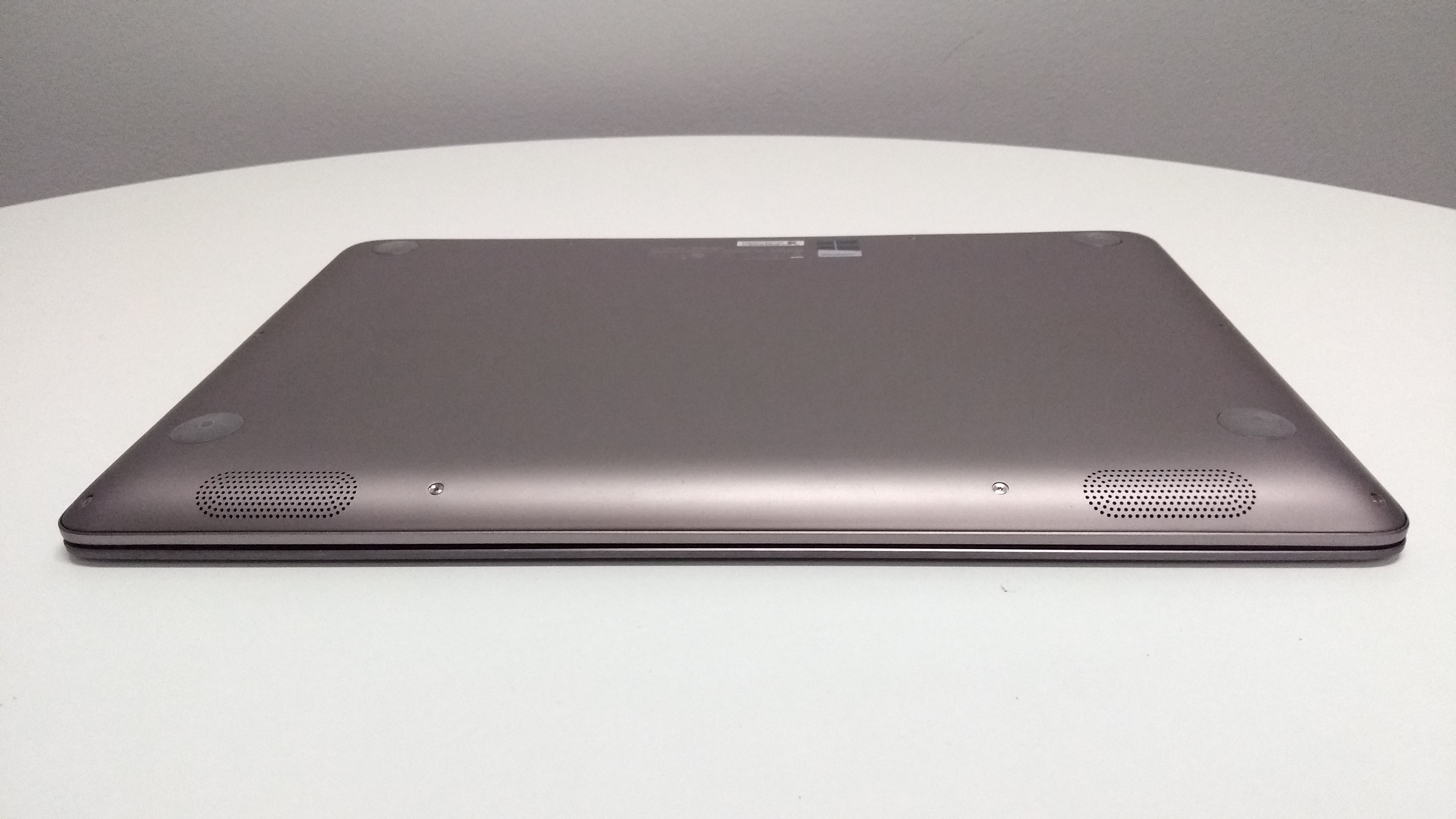 And we should mention the speakers: we actually prefer the Harman Kardon speakers to the Bang & Olufsens found in many Acer laptops.

The sound is more full, less tinny and more defined. The stereo pair are found on the underside of the front which, if placed on a firm surface, will push the sound into it, adding to the warmth of the audio.

It’s not often you mourn the lack of pre-loaded software, but in Asus’s case we actually do.

As mentioned earlier, Fan Xpert would have been handy to keep the fan noise down and battery efficiency up. And its Smart Touch software would have helped tame the skittish touchpad.

This is a serious MacBook Air alternative. It looks great, the screen is excellent and the all-aluminium body will take quite a bit of office battering.

We reviewed many mid-to upper range laptops at this price, and the Asus Zenbook UX310UA comes with one of the best QHD screens we’ve seen in a while. Admittedly it’s not quite as sleek as some of its competitors, but the basic design is incredibly elegant and aluminium throughout. And  it comes with a free case. What’s not to like?

The less-than-impressive battery life is basically the Asus Zenbook UX310UA's Achilles heel. If only Asus could sort out the constantly whirring fans or whatever else is doing the power draining. Maybe putting a more powerful battery cell could help.

Whatever the issue, this could be a deal breaker for some. There’s also the issue of the bendy keyboard and jumpy trackpad, but these are more niggles than serious flaws. Also, if you’re looking for a touchscreen, this is obviously not for you.

The hard drive could be a little bigger, as 256GB is going to get full pretty fast. So it might be good to pair it with cloud storage account or external drive. 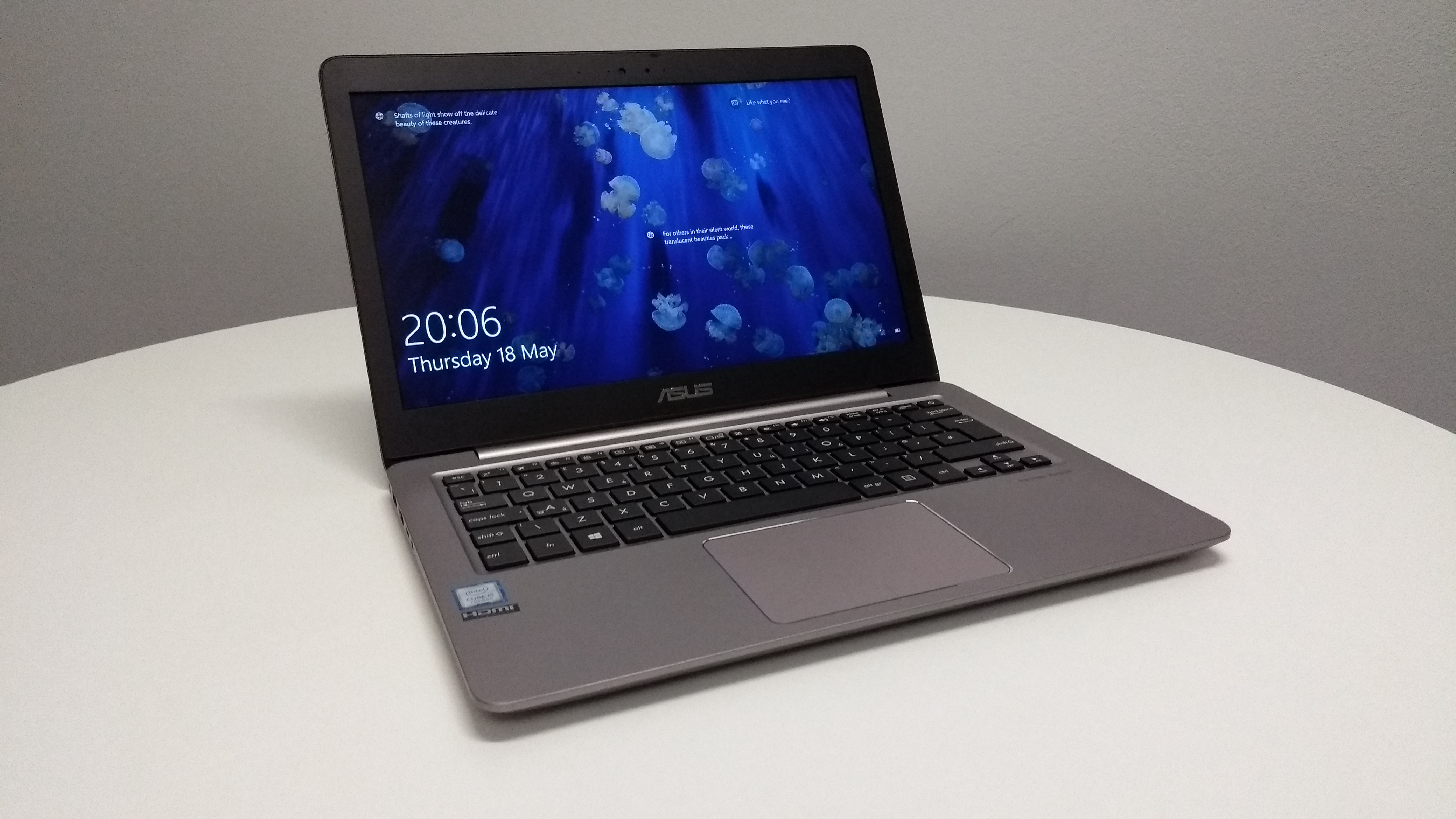 The Asus Zenbook UX310UA is an able and well-performing laptop that certainly looks the part with a quality all-aluminium build and elegant design decisions.

It’s much more affordable than Dell’s XPS 13, putting it in reach of students and budget conscious office workers. It also puts it in the MacBook Air’s price range, which is another bonus, especially because it has a better display. And, while it may not be the lightest laptop in the world, we appreciate how sturdy it is.

Apple have most definitely dropped the ball, and while the Asus Zenbook UX310UA isn’t quite in Apple's league, it’s an attractive alternative if you’re not too fussed about lacklustre battery life.