In a world that seems to be always connected, it’s easy for companies to become complacent in their use of technology, falling behind along the way. Take the desk phone, for example, an ageing concept in and of itself that some would argue no longer has a place in our offices.

Once tethered to the same copper wire tech invented back in the late 19th century, it should come as no surprise that landlines are fading into obscurity. After all, now we all have phones in our pockets that are capable of so much more than taking analog phone calls. If our smartphones power the world, why aren’t we using them as our primary means of communication in the workplace? Why settle for the rather limited desk phones when you can opt for a pocket phone that runs apps and stores files in the cloud, no questions asked?

Well, one of the biggest concerns stacked against advocates for BYOD (Bring Your Own Device) programs is security. It’s crucial not only that we have the flexibility we need to work efficiently in an office environment, but that we also don’t let classified company information slip through the cracks. For that reason and more, PBX (Private Breach Exchange) phone systems exist as a safe middle ground between using old school landlines in the workplace and haphazardly letting employees use their personal smartphones for business.

Because PBX phone systems are cloud-based, they can integrate with smartphones to provide Voice over Internet Protocol (VoIP) services to your staff independent of the device that they’re using. In theory, these VoIP providers are there to make it possible for users to start one task on their desk phone and resume it later on their smartphone, laptop or desktop computer. Among those involved in the VoIP market is Jive Communications, a company owned by remote desktop software developer LogMeIn.

Unlike some competing VoIP services, which include everything from RingCentral Office to Microsoft Skype for Business, Jive is dead focused on its mission to improve VoIP security. Complete with end-to-end encrypted “Jive Secure” calling that extends to virtually any device you use it with, Jive wants to ensure that you can identify every last piece of hardware connected to your company network in order to prevent the spillage of internal materials discussed over telecommunications.

But that’s not where the functionality of Jive starts and ends either. Join us as we run down all the unique features that Jive has to offer while also exploring the various pricing options you can choose as you consider deploying one of the top VoIP services at your organization. Let’s take a look.

First off, the price. The cost of Jive for your business depends entirely on how many people will need to take advantage of its many features. More specifically, pricing is based on the number of “seats,” presumably at your office, that’ll be using Jive.

Jive also claims that “special pricing” is available for any business that calls for more than 100 Jive seats, perhaps indicating a slightly lower cost, though you’ll have to sit on the phone with a Jive customer service rep to find out for sure.

One of the best parts about Jive, as opposed to bigger name rival services like RingCentral Office or 8×8 Virtual Office Pro is that no matter what price you pay, you’re getting the same features. While those aforementioned VoIP providers have pricing tiers that raise and lower the amount of functionality employees can take advantage of, Jive is a one-size-fits-all solution. With it, you can bank on a long list of features (over 80, according to Jive), some of which we’ve yet to see elsewhere. 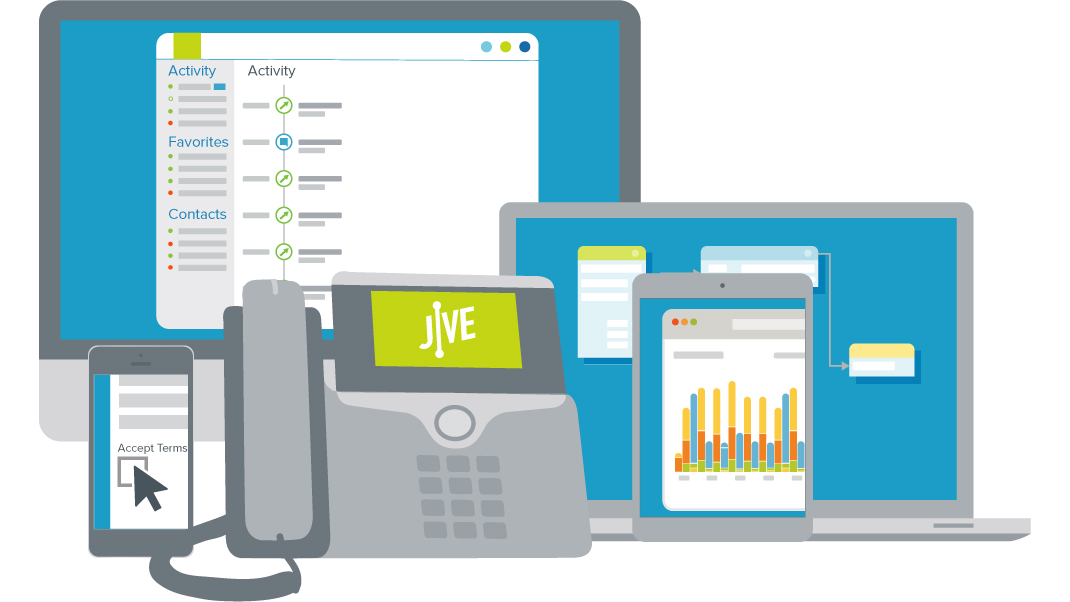 You can peruse the full list here, but to summarize, Jive offers an auto-attendant, virtual fax, call recording, custom hold music, call parking, call forwarding in addition to call center-specific features such as wait time announcement and agent login/logout. More mundane, but highly necessary, features are also in place, such as speed dialing, call waiting and number porting for migrating over your existing PBX hardware should you make the switch to Jive.

Unique features, like Whisper, which lets administrators discreetly give agents instructions while they’re on the phone speaking with customers, are also included at no extra charge. Jive even integrates with CRM services like Salesforce, Zoho and Redtail.

It goes without saying that we are impressed with what Jive brings to the table. Instead of divvying up features into exclusive pricing tiers, the cost of Jive to your company is based on sheer volume of employees. The higher the number of employees in the office, the more likely you are to benefit from Jive’s various subscription plans.

Stuffed with a wealth of useful knick-knacks, Jive is a feature-packed VoIP PBX phone system that has a great deal more to show for its accomplishments than a run-of-the-mill mobile app – it’s an excellent value made possible by a business model that every VoIP provider should adopt. Oh, and for a limited time, every Jive seat is entitled to a complimentary GoToMeeting Pro License, in case HD video conferencing is part of your workflow.