SpiderOak has a very high reputation in the cloud storage world, mostly because it takes security very seriously and delivers excellent feature sets.

Now called SpiderOak ONE, is this the backup and sharing tool by which all others will be judged?

This would be an easier review to write if we could just mention the very limited selection of things that SpiderOak ONE doesn’t do.

Its primary function is to secure folders and files to cloud storage, and we’re talking any folders, even those that are on external drives or the local network.

However, if the network shared folders are on machines that can run the client, then you could run it there, as a single account isn’t limited to a specific number of machines.

That makes it perfect for syncing multiple computers with live data modified on any of them.

What it won’t do is image a system in a way that it can be restored from bare metal.

In addition to the file-based backup, SpiderOak has an additional layer of functionality where files can be transferred to the cloud without having to live on a computer simultaneously. 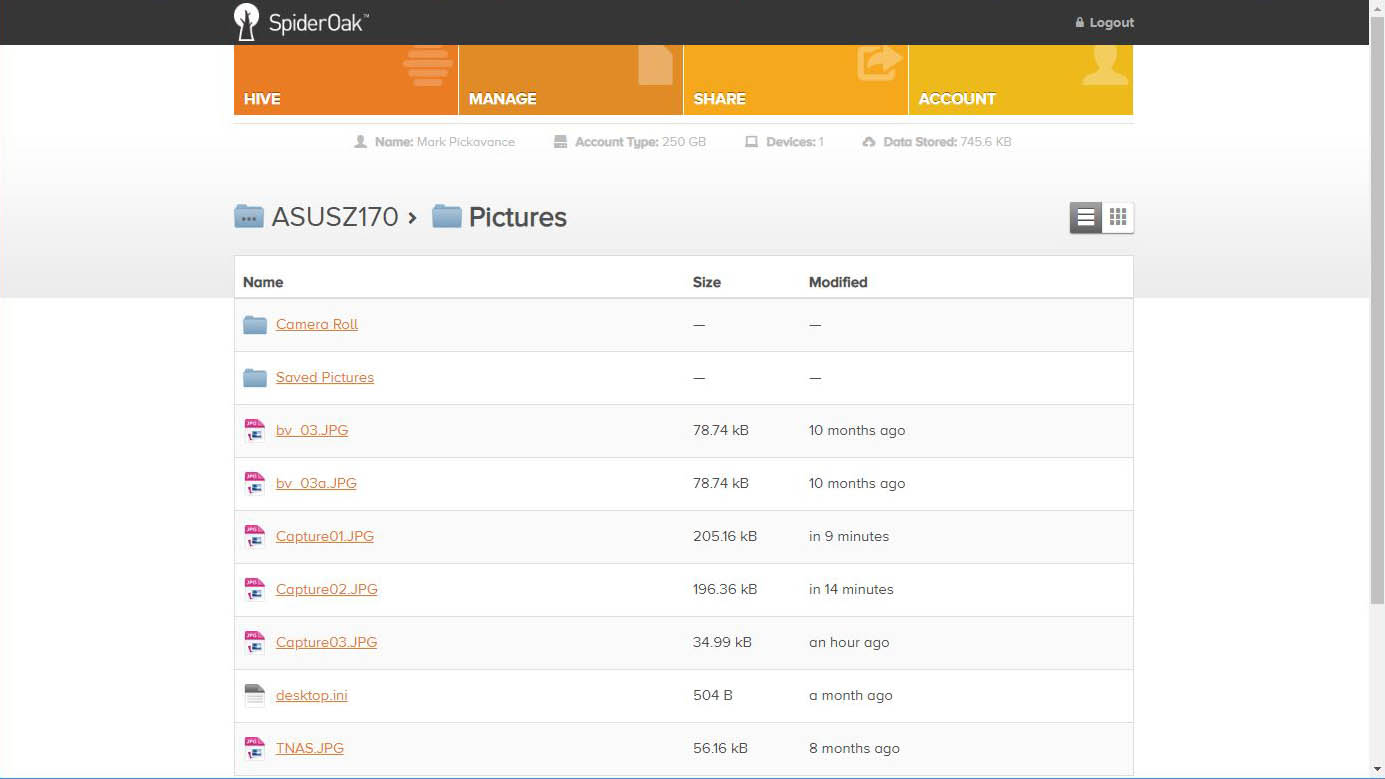 Called SpiderOak Hive, this folder is bolted into the default document location on the computer, allowing files placed in it to pushed to the cloud directly.

We should mention that all the of the SpiderOak sync operations can be ‘live’, or you can make them timed, the choice is entirely up to you.

Backup and Hive are the two main layers of the SpiderOak ONE solution, but it also has a sophisticated sharing functionality, where you can create a ‘ShareRoom’ and invite people to access it with a room key and password.

All the ShareRooms you create have a specific web page location, and any folder on the computer can be tagged as the source for one, it doesn’t need to be one that is being backed up or be in the Hive folder.

What we also liked about how SpiderOak functions are that all transfers are block based, meaning that if you make changes to a large document only those parts that altered get sent, dramatically reducing sync times.

The client tool is available for Microsoft Windows, Apple Mac and Linux operating systems, and there are also mobile apps for Apple iOS and Google Android mobile devices.

However, the mobile devices only give you access to the cloud stored files, and don’t secure any files or data from those devices.

You can push files out to mobile devices using the Hive folder, but getting mobile apps to write into that on a phone or tablet might be challenging.

The mobile support is one of the few weaknesses of SpiderOak ONE, and a limitation it should probably address. 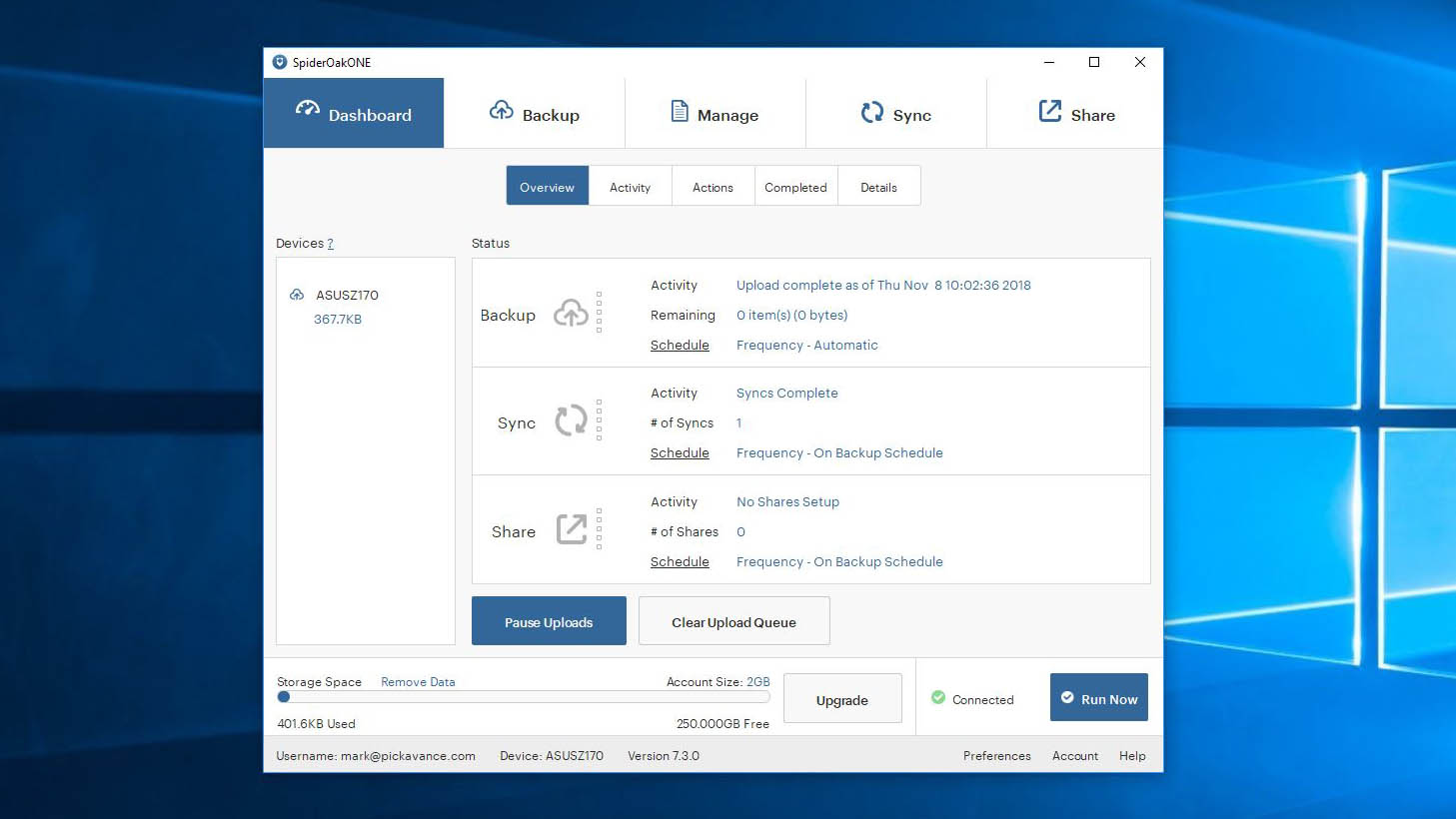 Almost irrespective of the OS you have the desktop client software looks the same, and it’s a look that is about functionality more than anything else.

Once you’ve connected the account with a login and password, you can then decide which files and folders you need to secure, and from that point onwards SpiderOak will keep those things safe.

At any time you can initiate a restore from the Dashboard, and you can also pull back older versions of a file with no limits on how old that version might be from the inception of the file.

All activities are logged, so you have a complete report on when a file was secured, replaced with a new version or deleted.

It is possible to override this and delete old versions, but files will only be truly deleted when you purge them from the deleted items bin, useful if you make a mistake and delete the wrong one.

Some of the things that you can do on the desktop client are mirrored with the SpiderOak One web-based portal, with the main exception being that you can’t tinker with the backup plan from here.

You can access the Hive folder ShareRooms and download the files, and you can also disconnect a computer from the service.

Why you can’t create a ShareRoom from here, we’re not sure, but it would make this part of the solution more useful than it currently is. 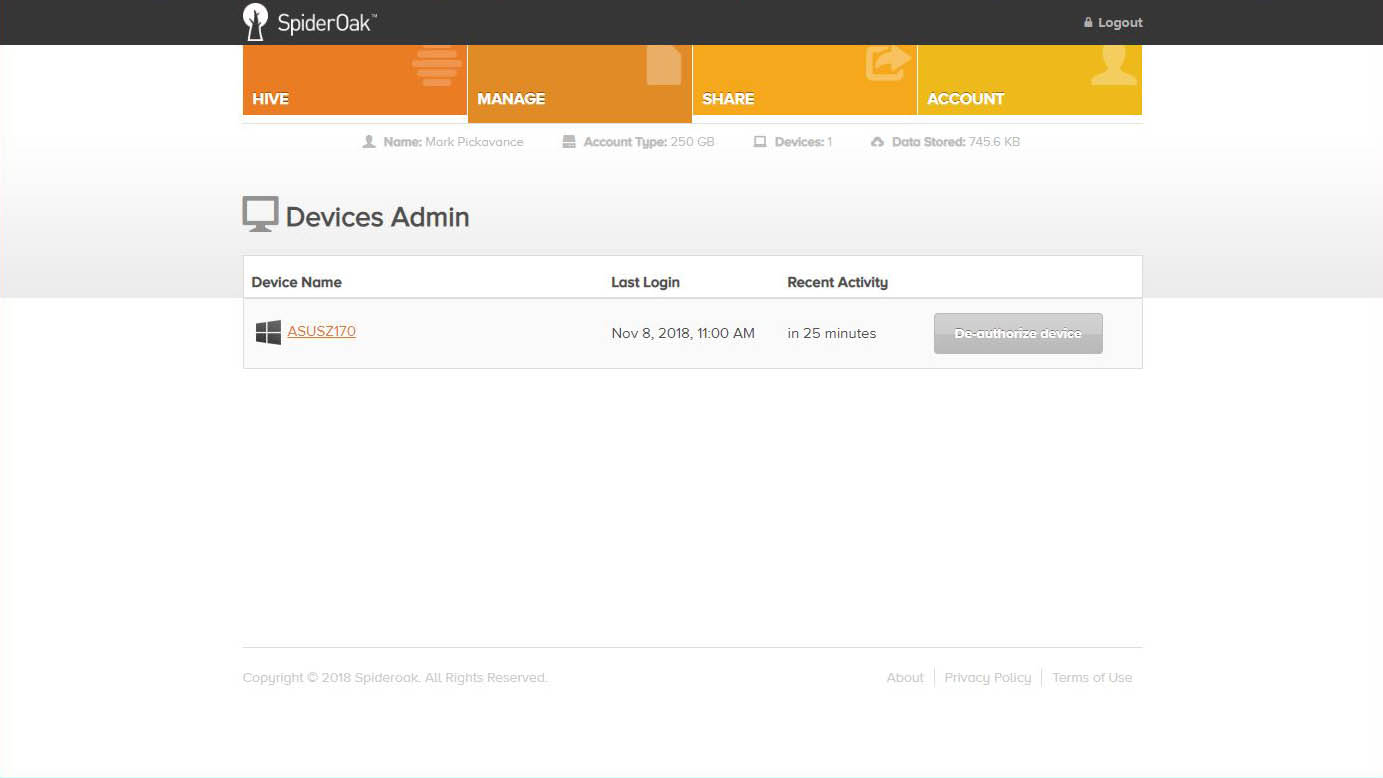 We’ve seen plenty of cloud storage facilities that talk about how seriously they take security while failing to truly deliver on those promises. SpiderOak ONE isn’t one of those.

Without setting any switches or paying extra money, SpiderOak ONE gives you end-to-end security from the outset, and only you can decrypt your files as SpiderOak doesn’t have a backup of the password you used when you created your account.

The only exception to this are files connected to ShareRooms, which by their very nature must be left unencrypted for others to access.

While this approach provides SpiderOak customers with the best levels of security, the downside is that should you forget your password then you’ll never be able to get to these files ever again.

We’d, therefore, recommend that you use some other mechanism for storing those codes and retrieving them should you easily forget things.

Other cloud storage solutions often don’t encrypt metadata extracted from your stored files, allowing hackers to probe the metadata for clues about how they might gain access to the rest.

This can’t happen with SpiderOak ONE, because the metadata never leaves the client computer, and it is also encrypted there.

The only flaw we can see in the security scheme is the lack of two-factor authentication, but this feature is in beta, so expect to see that soon. 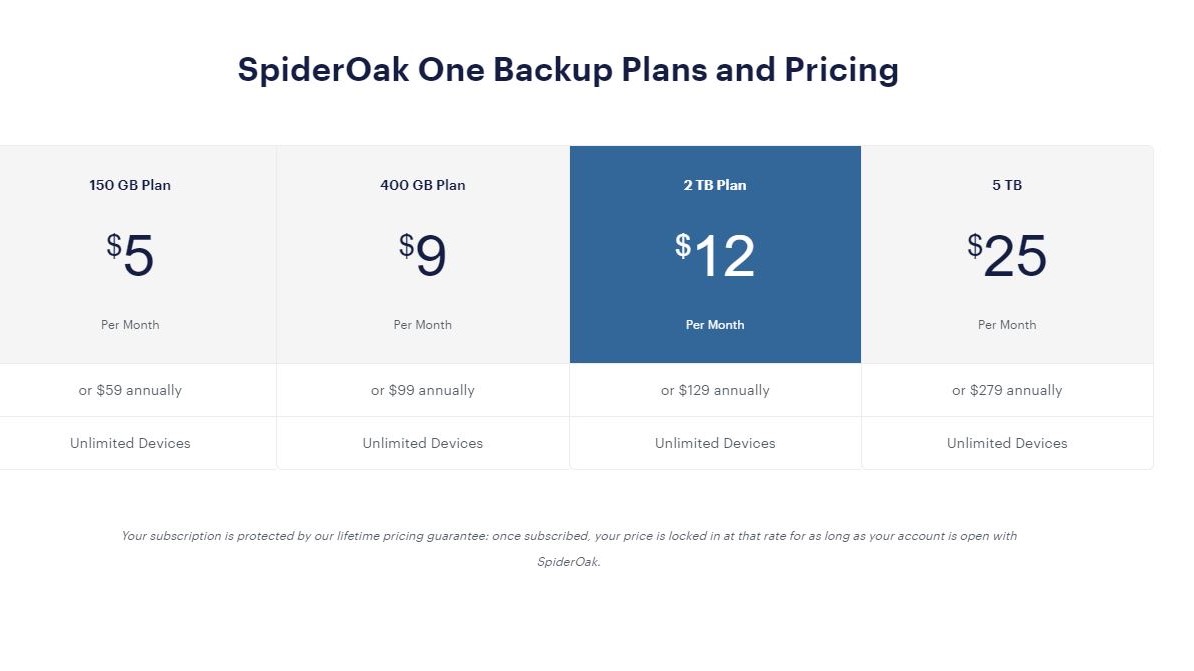 For those wishing to test out SpiderOak ONE, its currently offer a free 21-day trial with 250GB of space to play with.

Those are also on a monthly payment plan, and you can reduce the average cost by about 7-10% if you take an annual contract.

Our view of SpiderOak ONE is that it ticks very specific boxes for those that want good security and solid functionality that provides most of the features that people buy a cloud storage service to use.

It doesn’t take the mobile space as seriously as it should, and there aren’t any concessions made to interoperability with Office applications or collaboration tools.

To a degree it makes up for those limitations by providing a high-speed solution that most users can fire-and-forget, the true value of its existing only coming into play when things go wrong with a machine or its internal storage device.

If we had files that we needed to securely store and distribute, we might well consider SpiderOak ONE as a dependable means to achieve that.